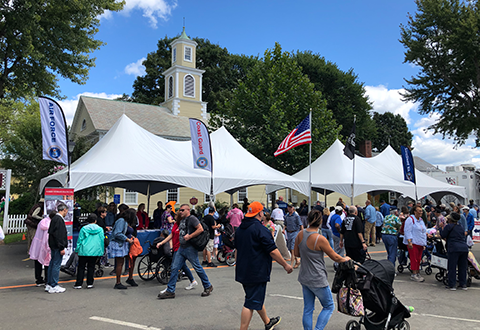 VA representatives from throughout New England assembled at the Eastern States Exposition on Sept. 13 for The Big E, an annual regional fair in West Springfield, Mass. A VA outreach center along the Avenue of States offered information on VA benefits and programs to include an opportunity to enroll in VA health care or meet with VA representatives to file a claim for a service-connected disability. (VA New England photo by John Paradis)

U.S. Department of Veterans Affairs representatives from throughout New England assembled at the Eastern States Exposition for The Big E, an annual regional fair, to support the day.

A VA outreach center along the Avenue of States was created to enroll Veterans into VA health care or assist them with filing a claim with VA for a service-connected disability.

In the seven years since the VA New England Healthcare System has presented Military Appreciation Day at The Big E, it has become the largest VA veteran outreach event in the nation.

Each day during the fair, The Big E is dedicated to a particular New England state or non-profit organization, but the first day of the fair is always Military Appreciation Day, and is The Big E’s favorite way to kick-off the fair.

The attendance was helped by thousands of veterans who arrived early to meet up with VA health care and benefit representatives along the Avenue of States, said officials with The Big E.

“Veterans came early knowing they have a great opportunity to meet up at the VA area and to get a head start in connecting with all the veteran benefits and programs the VA offers,” said Noreen Tassinari, the director of marketing at The Big E. “Military Appreciation Day is a very popular attraction and one of the highlights for us.” 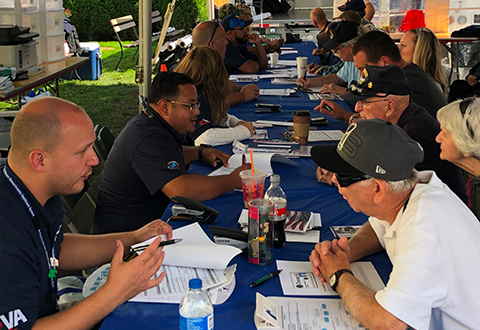 VA eligibility specialists meet with Veterans at the VA New England outreach area on Sept. 13 at Military Appreciation Day at The Big E at the Eastern States Exposition in West Springfield, Mass. More than 100 Veterans completed applications for VA health care. The Big E is the largest VA outreach event in the nation. (VA New England photo by John Paradis)

This year, 102 Veterans signed up for VA health care and 122 Veterans met with representatives from the Veterans Benefits Administration with 78 starting a claim for service-connected disability compensation and pension, said Michael McNamara, VA outreach program manager for the VA New England Healthcare System.

In addition, more than 400 Veterans met with readjustment counselors from across New England at a Mobile Vet Center that was co-located with the VA outreach area.

“We had another fantastic year at The Big E thanks to the many VA employees and outreach specialists from across our region – this was a total VA team effort, said McNamara. “Due to our efforts, hundreds of Veterans will now receive VA health care or benefits that will improve the quality of their life.”

A highlight of this year’s Military Appreciation Day was a partnership with Walgreens to provide flu shots to 394 Veterans, a record number for VA health care at an outdoor outreach event.

The flu clinic at The Big E’s VA outreach area was established on Military Appreciation Day as part of a national program to offer Veterans enrolled in VA health care easy access to flu shots.

“The flu clinic at The Big E is just another example of how VA is expanding access for our Veterans and the response from Veterans was overwhelmingly positive,” said McNamara. “We provided more free flu shots for Veterans at a single event in our region than ever before thanks to this partnership.”

In addition to the VA outreach area, more than 30 state and community partners, to include the Massachusetts Department of Veterans’ Services assisted Veterans with answering questions about local and state benefits at a “Veterans Commons” area at The Big E’s Massachusetts State Building.

Free Veteran commemorative T-shirts and a chance for military members and veterans to win in several military appreciation day contests to include tickets to a regular season New England Patriots home game was also offered.

The next VA New England major outreach event is the Durham Fair in Durham, Conn., from Sept. 26 through Sept. 29. VA New England is the official presenter of Military Appreciation Day at the fair on Sunday, Sept. 29.

For more information on VA health care in New England, call 1-844-VA-CARES or go to www.newengland.va.gov/outreach