A Place of Healing and Remembrance

In honor of the fallen service members of Operation Enduring Freedom (OEF), Operation Iraqi Freedom (OIF), and Operation New Dawn (OND), a Memorial Wall has been constructed at the Manchester VAMC for the families and friends of these brave heroes.

Debra Krinsky, Chief of Voluntary Services said, “When you first walk through the memorial, it is overwhelming. As you walk the hall and pass the portraits of the fallen, over time you feel as though you get to know them. It is very powerful.”

The Memorial Wall began as a way for Gold Star Parents to honor their fallen soldiers from recent wars. In 2009, Krinsky met a Vietnam Veteran who was passionately committed to honoring the fallen from OEF, OIF, and OND, and posted a picture of each in the hallway that leads to primary care. “It took twoand a half years to research and reach out to the families of these fallen heroes, and it was truly a labor of love,” Krinsky said. “Although just a few volunteers made this happen, it was a collaborative effort of Gold Star Families, volunteer support, and donations.” 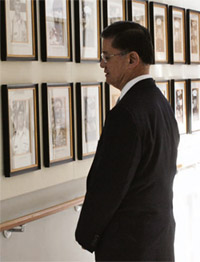 The Memorial Wall currently consists of two rows of framed photographs, one of each of the 54 fallen warriors. According to Tammy Follensbee, Associate Director of the Medical Center, “There is a purpose and plan for the way they are presented, matted, and framed.” She said, “All portraits are colored in sepia tone in order for them to stand united as brothers on the Memorial Wall. For this reason, we did not include their branch of the military or their rank. The portraits are arranged in chronological order by the date of death. The Wall’s location, in the quiet central core hallway, just off the main lobby of the Medical Center, provides a place for peaceful remembrance and a place of healing for family members and friends of those who were lost.”

Stella Lareau, Public Affairs Office for VAMC said, “The best thing about the Wall is that people aren’t forgetting. The mother of one Veteran whose picture is on the Wall works at the hospital. Every day she goes to her son’s picture and tells him, ‘Good morning.’ She knows her son won’t be forgotten.”

The Wall is open 24/7 so it is accessible to family at any time. It is very honoring and speaks to what these Veterans have sacrificed.”

“We still have 13 portraits that we’re missing,” Lareau added. “They’ll come, but they’ll depend upon where the family is in the grief process. If more names come to light, we will add them. We pray we don’t need to add any more, but there’s room if we have to.”

Last December, during a private viewing, Krinsky said she was showing the Memorial Wall to a Veteran. There was an empty place for a fallen soldier named George Rowell. She said they had researched him but were unable to get any information or pictures. The Veteran said, “I believe I have a picture of George Rowell in my truck.” He explained that the home George’s mother lived in was vacant, but someone had come across all the letters on George after his death — letters from dignitaries to his mother along with George’s military photo. “The Veteran brought all of George’s belongings to us,” Krinsky said. “I believe George wanted to be on the Wall with his brothers. We are proud to have him there.” 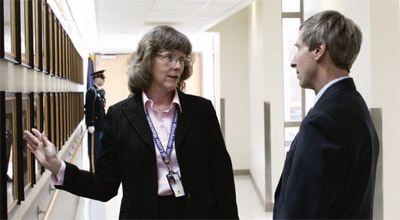 The public dedication of the Memorial Wall was held during the National Salute to Veterans on February 14, 2011. Local media, politicians, Gold Star Family members, Governor Lynch, dignitaries from other service organizations, Veterans, VA employees, and the general public attended.

A quote by New Hampshire native Daniel Webster hangs above the portraits, as moving as their service and sacrifice. It reads, “…yet will their remembrance be as lasting as the land they honored.”