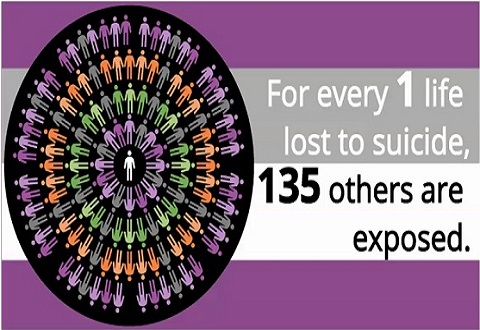 Every life lost to suicide represents someone’s partner, child, parent, friend or colleague. Researchers have found that up to 135 people are affected to some degree by every person lost to suicide.

Community leaders across southern New England met virtually to form stronger relationships to prevent Veteran suicides in their region and to discuss outreach strategies for Veterans who are struggling under COVID-19.

Among the more than 250 attendees were librarians, gun shop owners, educators, social workers, medical professionals, directors of veteran services, and leaders of the faith-based community.

VA speakers reminded the group that you do not have to be a mental health professional to save a life and that suicide prevention is a total team effort.

“We know that VA can’t do this alone,” said Ryan Lilly, the director of the VA New England Healthcare System, in remarks to open the conference. “It’s really going to take every entity, every individual, and every organization that interacts with Veterans on a routine basis to help us get there.”

The conference, now in its second year, was held during National Suicide Prevention Awareness Month. Last year, the conference was held in-person in northern New England.

Suicide prevention is even more important during pandemic

This year, participants noted that the COVID-19 pandemic has added stress to Veterans already feeling the weight of readjustment to civilian life from deployments and economic challenges. And while the public often focuses on the number of younger Veterans who commit suicide, participants reviewed statistics that show the suicide rate for elderly Veterans is higher than that of non-Veterans of the same age.

Presenters discussed strategies for how communities can connect with Veterans using technology and to find creative ways to reach out and provide support. There are things every person can do every day, like calling a friend or checking in with a neighbor.

Such simple practices are particularly strong preventive factors for suicide during the pandemic because they help people feel less alone, said several speakers.

“That’s what this campaign is all about – encouraging people to be there for each other,” said Shara Katsos, the VA New England deputy lead for Veteran homeless programming and the lead for VA New England’s strategic initiative for suicide prevention.

Fears associated with the coronavirus have intensified PTSD, overall anxiety and depression as well as suicidal thoughts for many Veterans, said speakers. Many Veterans also feel that they should be able to solve a crisis in their life on their own and therefore are often reluctant to seek help.

Everyone has a role in suicide prevention

“We all have a role in getting people to understand that they don’t have to solve this on their own,” said Ryan Pitts, a former U.S. Army soldier from Lowell, Mass., who is ninth living recipient of the Medal of Honor from the war in Afghanistan. Pitts said the community can make a difference in reaching out so that Veterans never feel alone.

David W. Schafer, VA New England director of Mental Health, stopped the conference and waited until each participant added the number to the Veterans Crisis Line as a contact on their smartphones. The number is 1-800-273-8255. Veterans in crisis or those who are concerned can then press 1 to reach help.

“This is one thing you can do today, right now,” he said.

Since most Veteran suicides occur among Veterans who have not used VA health care or VA mental health, community partnerships are critically important in reaching Veterans who may not be receiving care from VA. The Veterans Health Administration’s Office of Community Engagement has focused its attention on creating such partnerships.

“There is a great respect and appreciation for what you do on the front lines every day because this requires all of us,” said Miller.

A positive outcome from the conference is building stronger relationships among such partners in New England, said Katsos. Of the 17 Veterans who each day take their own life, 11 have not accessed VA health care, she said.

“My hope is that you leave today feeling inspired and empowered and that we as citizens can share a common purpose to make a difference in reaching those 11 Veterans who may not even know there are resources for them,” said Katsos.

Another strategy VA New England is using is “postvention” – building upon prevention efforts by providing support to those impacted by suicide loss.

Training for VA New England clinicians was scheduled the day before the community conference to discuss resources and support for anyone touched by suicide.

“We’re the touch points for many Veterans, who are struggling,” said Schafer, who noted the importance of each VA clinician in “strengthening the tool kit” in finding ways to heal and deal with the personal and professional impacts of suicide loss.

“We often struggle from the impact of our work so I am very appreciative of the work we are doing to provide organizational support,” said Schafer.

To learn more about VA’s community partnerships to prevent Veteran suicides or to inquire about starting a partnership, visit www.va.gov/healthpartnerships.