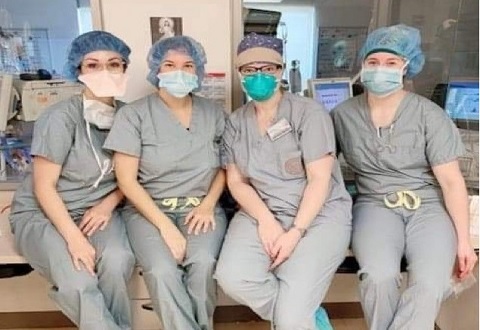 They were the COVID Cavalry.

They are VA employees who are Citizen Soldiers and Airmen -- members of the National Guard and Reserves who mobilized to augment civilian and community hospitals and support the local response to the coronavirus outbreak this year.

This Labor Day has special meaning for VA New England health care professionals who were activated for the nation’s COVID-19 response.

Hatfield, a captain in the Air Force Reserve at Westover Air Reserve Base in Massachusetts, pulled shifts at the intensive care unit at Queens Hospital Center in New York City.  Edwards, a lieutenant colonel in the Rhode Island National Guard, was the medical planning and operations officer-in-charge for the Rhode Island Guard’s Office of the State Surgeon.

At the request of the Federal Emergency Management Agency and state officials, thousands of Department of Defense medical and support professionals from Reserve and Guard units have been assigned as part of DOD’s ongoing COVID-19 operations.

Hatfield and Edwards said their VA experience was an added plus in assisting local and state personnel in areas hard hit with an overload of coronavirus cases.  They were able to integrate immediately into their military units to combat COVID-19.

“For the first time in my military career, our medical experts were the tip of the spear dealing with the greatest public health crisis of our collective lifetimes,” said Edwards, who served as the acting medical detachment commander for his unit from April 1 through July 4.

Hatfield arrived at Queens Hospital Center on April 6. The hospital, also known as NYC Health + Hospitals/Queens, is part of the largest civilian public health care system in the nation, and is located in the Jamaica Hills and Hillcrest neighborhoods of Queens in New York City.  She arrived that day in a city ravaged by the pandemic and few places have been as hard hit as central Queens.  On day one, within the first few hours at the hospital ICU, she was already seeing dying patients.

“We saw the sickest of the sick,” recalls Hatfield, who described an intense scene of doctors, nurses and other staff rushing between the emergency room and ICU, not enough equipment, and codes going off overhead at all times of the day.

“It was total chaos and at the end of the first night, I thought to myself, ‘this is how it’s going to be,’ and it was like that for many, many of the days I was there,” said Hatfield, who said hospital management dubbed the Reservists who arrived “The COVID Cavalry.”

Relying on their military leadership experience was critical, both Hatfield and Edwards said.

“When you’re dealing with so much constant change, and such a steep learning curve, the key is relying on each other and the collaboration is so important,” said Hatfield.  “We were constantly asking one another, ‘what did you learn, what did you see, what helps where you are?’”

Edwards said the Rhode Island Guard’s immediate activation was a significant boost for Rhode Island and helped slow the spread of COVID-19 in the state by increasing testing capacity and enforcing public health measures.

“Our scope seemed to broaden on an almost daily basis,” he said.

Now back to their VA duties, both said their experiences on the COVID-19 frontlines in the civilian community were ones they won’t ever forget.  They are putting what they learned during their COVID-19 call-ups to good use in their VA positions and for any future mission.

“As with many front-line care givers and first responders, our National Guard members were some of the first into the fight against this global pandemic,” said Edwards.  “As the fight continues to morph and we learn more about this disease, the governor and our state agencies continue to rely on the operational knowledge base and expertise of our military service men and women who continue to put themselves in harm’s way for the greater good of their communities.”

Hatfield noted the strenuous times for all health care providers and the added commitment for military members whey they leave their families during call-ups like her recent one.  And with the unpredictable nature of this pandemic, that call could come again any day, she said. 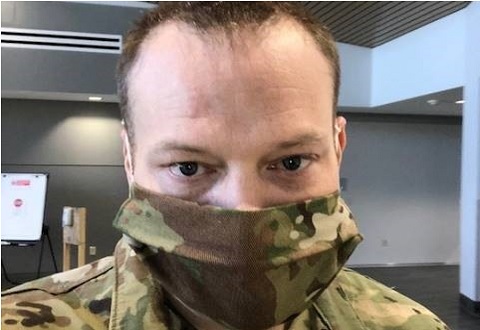 Matthew P. Edwards, an administrative officer at the VA Boston Healthcare System, is a lieutenant colonel in the Rhode Island National Guard. He was the medical planning and operations officer-in-charge for the Rhode Island Guard’s Office of the State Surgeon earlier this year during the COVID-19 pandemic. 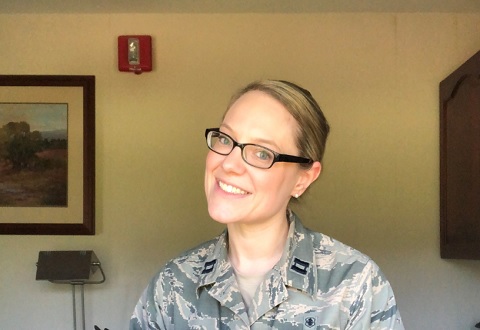 Chelsie Hatfield, a nurse practitioner at White River Junction VA Medical Center, is a captain in the Air Force Reserve at Westover Air Reserve Base in Massachusetts. Hatfield was assigned to the intensive care unit at Queens Medical Center in New York City to care for patients with COVID-19.

Hometown: Grew up in Jefferson, N.H., and currently resides in Sharon, Vt.