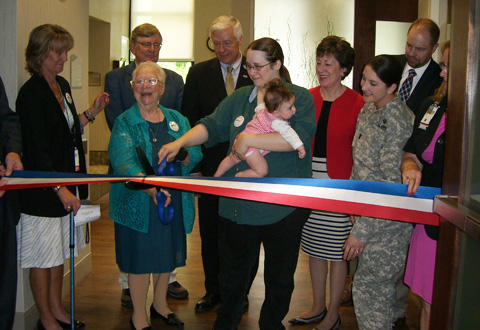 Ruby, a Marine veteran, cuts the ribbon along with Kim, an army veteran.

Recognizing a need to serve a growing population, the VA Maine Healthcare System on June 30 officially opened its new clinic for women Veterans on its Togus campus in Augusta.

"We currently serve about 2,200 women patients in the state, but we hope to serve considerably more," said LaRhonda Harris, the women Veterans program manager for the VA Maine Healthcare System. "The number of women coming to Togus and other VA hospitals has been on the rise, and will likely continue to grow as women Veterans return from Afghanistan and Iraq. A separate clinic for women is so important because they often have different healthcare needs than out male Veterans."

For example, women Veterans suffer from depression at twice the rate of men, according to a long term study currently being conducted by the Department of Veterans Affairs. They also have greater anxiety and difficulty in readjusting to civilian life than male Veterans, according to the study. Perhaps most notably, fully 20 percent of women seeking care at VA facilities have been the victims of military sexual trauma.

"Here at our clinic we can provide them with the gender-specific care that they need," Harris said. "In addition to our primary care team, we have gynecological specialists here on site as well as mental health professionals like Kathy Russin, our military sexual trauma coordinator."

Russin said military sexual trauma, or MST, is a significant issue for many women seeking treatment at her clinic.

"Depression and anxiety are often the aftermath of a sexual assault," she explained. "It's a trauma that was created by another person, not a wartime experience. It can cause serious relationship problems. A Veteran who's experienced MST can find herself having trouble interacting with others... with her husband or boyfriend, her kids, her friends, her supervisor...

"Creating or sustaining healthy relationships is a huge issue for women who've experienced MST," she observed, "because it affects your relationship with everyone. This is why we see so many MST victims having trouble maintaining employment, for example."

Russin said MST is different from other types of trauma because it has a unique element all its own: the betrayal factor.

"So much of military training centers around unity, the team," she explained. "In the military they teach you that can trust your comrades with your life. So when your comrade turns around and sexually assaults you, the effect is quite traumatic. Here you thought you were a member of a team. But you've been betrayed, and it leaves a deep psychological wound."

The VA does not limit the definition of military sexual trauma to rape, Russin said.

"We also define it as an attempted sexual assault," she explained, "or continuous, hostile sexual harassment. This includes systematic sexual humiliation. No one lays a hand on you; the assault is psychological. The assault is on your self-esteem."

Russin admitted that the kind of work she does at the women's clinic, day in and day out, can be challenging.

"I've been a trauma therapist for most of 20 years," she said. "The work isn't easy, so like all trauma therapists I need to spend a good bit of time taking care of myself. But in the end, it's these women who keep me going. They've been assaulted, yet they are smart, strong, and resilient. Their lives have been damaged by this experience, but I get to see them gradually heal and move on. It's uplifting. Their stories are difficult to hear, but their ability to recover is nothing less than inspirational."

LaRhonda Harris described the new women's clinic as a safe place, a welcoming location where women can feel cared for and respected.

"We want women to feel comfortable seeking care here," she said. "For example, an important feature of this new clinic is that it provides our women Vets with their own separate waiting room. Especially if you've been a victim of MST, I think you'll be more comfortable in a female-only waiting area.

"We've used a lot of calm, soothing colors in the waiting area, as well as the exam rooms," she said. "It's a very relaxing environment. Another nice feature is that each of our four exams rooms has its own bathroom. And once you're in your exam room, you don't have to leave it. Each of our specialists will come to you; you don't have to go to them. This is a very patient-centered place."

To learn more about military sexual trauma and the services available to those who've experienced it, visit www.mentalhealth.va.gov/msthome.asp

For more information on post-traumatic stress disorder, visit the National Center for PTSD at www.ptsd.va.gov