Remembering the sacrifice of the Four Chaplains 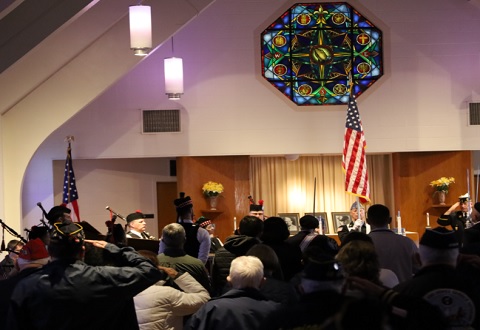 Veterans salute the American flag during the National Anthem at the annual Four Chaplains Memorial Observance in memory of the four clergymen who gave their lifejackets to crewmen when the troopship Dorchester was torpedoed by a German U-boat during World War II (photographs by John Paradis, VA New England Healthcare System).

Veterans gathered at ceremonies across New England on Sunday, Feb. 2 to mark the 77th anniversary of the sinking of the United States Army Transport Dorchester and the selfless acts of four Army chaplains who sacrificed their lives to save others.

One of the noteworthy remembrances was held for the 44th year at the chapel at the Edward P. Boland VA Medical Center in Leeds, Mass.

The VA Central Western Massachusetts Healthcare System annually hosts the Four Chaplains Memorial Service on the first Sunday in February in memory of the four clergymen who gave their lifejackets to crewmen when the troopship Dorchester was torpedoed by a German U-boat during World War II off the Newfoundland coast.

Among the dead on the Dorchester were two Protestant clergymen, George Fox and Clark Poling; a Catholic priest, John Washington; and a Jewish rabbi, Alexander Goode. They helped others board lifeboats and forfeited their life jackets when the ship’s supply ran out.

According to survivors, the chaplains locked arms, prayed and sang hymns as the Dorchester disappeared into the bitterly cold North Atlantic.

The American Legion Department of Massachusetts sponsors the event at the VA medical center in Leeds. 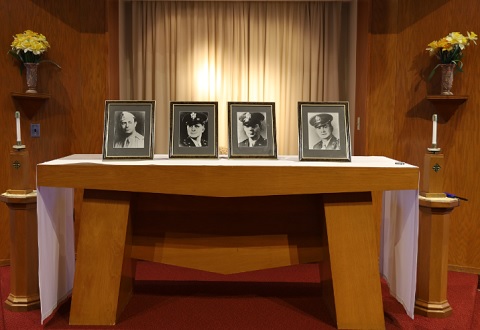 Photographs of the Four Chaplains were displayed during a memorial observance in their honor at the U.S. Department of Veterans Affairs chapel in Leeds, Mass.

A SELFLESS DEVOTION TO OTHERS

“I think, for me, what makes the story of the four chaplains so moving is that I’m not aware of any other story that combines a faith in God and country, an all-embracing camaraderie and teamwork, along with a selfless devotion to others,” said Jodie Pajak, the commander of the American Legion Department of Massachusetts and a Navy Veteran of Desert Storm and Desert Shield.

The observance included Veterans and representatives from the American Legion, the Military Order of the Purple Heart, the Veterans of Foreign Wars and the Marine Corps League.

The Holyoke Caledonian Pipe Band, the oldest continuously active bagpipe band in North America, provided musical honors during the observance, including the performance of “Amazing Grace.”

Commemorations such as the four chaplains service extends the VA’s mission in serving those who have served and “honors the legacy of service and sacrifice”, said Marie Robinson-McLaughlin, associate director of Patient Services at VA Central Western Massachusetts Healthcare System.

The remembrance of the four Army chaplains provides all Americans with a lesson in commitment, courage and selflessness, said Leo Barber, American Legion Massachusetts District 2 commander and an Army Veteran of the Vietnam War.

“It’s about respect,” said Barber. “It’s about never forgetting what they did. They were heroes. They all stayed together and they all went down together. They gave up their own life jackets so that others could live. It’s really an amazing story.”

Barber and Deb Barber, the District 2 director for the American Legion Auxiliary Department of Massachusetts, placed a memorial wreath at the chapel’s altar.