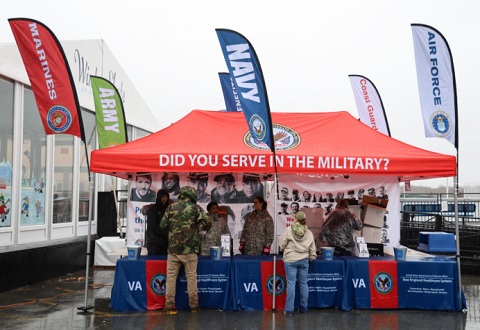 Outreach specialists from the VA New England Healthcare System and Vet Centers from across the region were part of the annual Salute to Service game at Gillette Stadium on Sunday, Nov. 24.

Before the National Football League kick-off between the New England Patriots and Dallas Cowboys, more than a dozen VA personnel greeted Veterans and members of the Armed Forces. VA New England set up a VA outreach center outside the stadium to answer questions about VA programs and to extend VA’s appreciation and gratitude to those who serve.

It was a rain-drenched day with high winds and temperatures in the 30s but the weather didn’t put a damper on those other patriots – military service member and Veterans and family members – who were honored at the game. 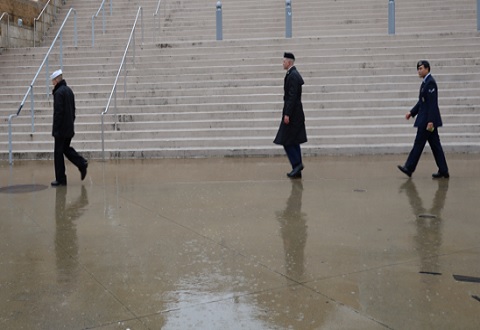 More than 200 Veterans stopped by the VA area, which included the regional Mobile Vet Center.  The uniform of the day was multiple layers of clothing.  Active-duty military were wearing their winter uniforms, and Veterans sported their favorite military camouflaged colors and Veteran pride items.  Many, of course, displayed the red, white and blue of their favorite NFL team.

“It’s November so we expect harsh weather conditions here in New England,” said Michael McNamara, VA New England’s outreach program manager.  “But what was really special was seeing so many Veterans who took the time to stop by to say hello and to thank VA for being there for them and to tell us they appreciated the great care they said they were receiving.”

The game included several on-the-field honors and tributes to service members and Veterans.

U.S. Army Chief of Staff General James McConville, a native of Quincy, Mass., and a big Patriots fan, did a swearing in ceremony for new recruits.

“This is a very special day because I’m back in my home town,” said McConville, who thanked the NFL and the Patriots organization for honoring the troops.  “The way they’re taking care of our soldiers and supporting our military is just great.” 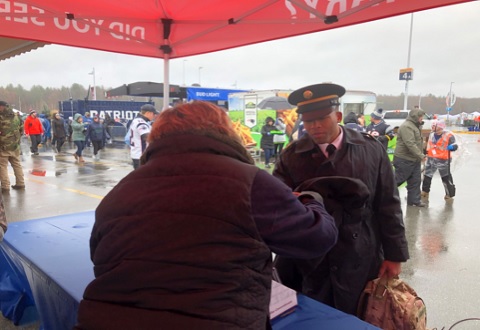 As part of the Salute to Service campaign, the Patriots paid tribute to all of the lives of service members who have died since Sept. 11, 2001, hosting 26 families of fallen service members at the game.

All Patriots players wore a special decal on their helmet with the initials of a man or woman who lost their life while serving in the Armed Forces.

The Patriots also announced that Joe Cardona, their long snapper, was the team’s nominee for the 2019 Salute to Service Award presented by USAA — the fourth straight year that the team has picked him as a nominee.

Cardona, a Naval Academy graduate, was promoted to lieutenant in the U.S. Navy Reserve earlier this offseason and has also led and hosted more than a dozen events in support of military families all over New England, including free football clinics for military children at military bases in the region.

The Patriots also announced that Michael Sweeney, a staff sergeant in the Massachusetts National Guard and the director of Veterans Services for the city of Lynn, Mass., would be honored as the team's "Difference Maker of the Week" for his work with military members and Gold Star families.

Near the VA outreach area was a six-foot-tall memorial for service members who have fallen since Sept. 11, 2001.   Funded through the Veterans and Athletes United organization, the “VAU Fallen Heroes Memorial” is a wall symbolizing the shape of the American flag made up of 7,000 dog tags from soldiers who have lost their lives since the 9/11 attacks.

The tributes were bittersweet for Steve Xiarhos, whose son, Nicholas Xiarhos, was killed in combat on July 23, 2009, in Garmsir, Afghanistan, serving in the U.S. Marine Corps.

“He was an all-American kid like all of them,” he said describing his son and all the fallen service members being honored. “He was 13 when America was attacked on 9/11. He told me that day that he wanted to be a Marine.”

Xiarhos said it was gratifying to see so many New Englanders celebrate the lives of service members and to continue the legacy of service.

“We love our military so to be remembered and included today is important and for us to help pay it back,” said Mr. Xiarhos, the deputy police chief in Yarmouth, Mass., who credited the Cape Cod Vet Center for helping his family and other Veteran families. “We could not have gotten through this alone – to lose a son, it‘s a life changing event.”

The Xiarhos family through a foundation they established in their son’s honor, the Nicholas G. Xiarhos Fund, contributes to worthy Veteran and community-based causes throughout the region.

“Cape Cod and Massachusetts has loved us,” said Mr. Xiarhos, who retires in December after 40 years in law enforcement. “We do anything and everything for our Veterans -- that’s what Nick would want.”