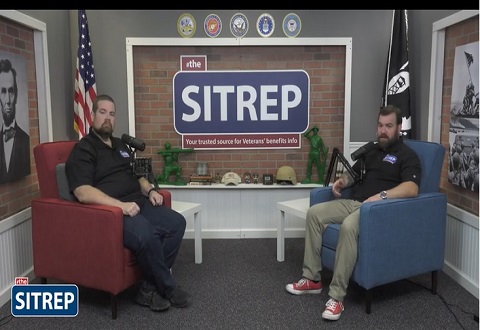 From a studio at the Bedford VA Medical Center in Massachusetts, Mike McNamara, left, and Paul Corbett, co-host the “SITREP,” a new online program for Veterans about VA health care and benefits.

Those are just two of the titles of the more than 50 videos segments, most no longer than a few minutes, that have been produced by the VA New England Healthcare System since the beginning of the COVID-19 pandemic. They can all be found on the Veterans Health Administration YouTube channel.

“Some Veterans think they are automatically enrolled in VA health care when they use other VA benefits,” says segment host Mike McNamara in the VA Myth #2 segment.  “This is absolutely not true,” says McNamara, an Army Veteran and VA New England’s chief of Outreach, Community Education & Advertising. McNamara then goes on to explain the eligibility requirements for VA health care.

The series on various myths that Veterans believe they know about VA health care has captured widespread interest, resulting in more than 40,000 views.

What’s the secret?  Nothing earth shattering, says McNamara. Whether in person or stuck at home due to COVID-19, Veterans are still hungry for well-produced information that explains benefits and programs, he says.

“In New England, we have always prided ourselves in doing outreach in our community – right in the towns and cities where our Veterans live,” says McNamara, noting that VA New England started a formal outreach program in 2010 as a way to engage more Veterans in a region of the country that is seeing a decline in its Veteran population.  Despite that decline, outreach specialists have enrolled more than 100,000 Veterans as new patients into the VA health care system since the program started.

Even before the start of the pandemic, VA New England knew it would need to adapt its outreach program in order to reach fewer and fewer Veterans.  One strategy was to produce short and concise videos, said McNamara, who said his team did extensive marketing research, to include focus groups with Veterans to determine the content Veterans most want to see. “The feedback has been enormous,” he says.

All total, more than 100,000 people have watched a VA New England Healthcare System video since the beginning of the pandemic. 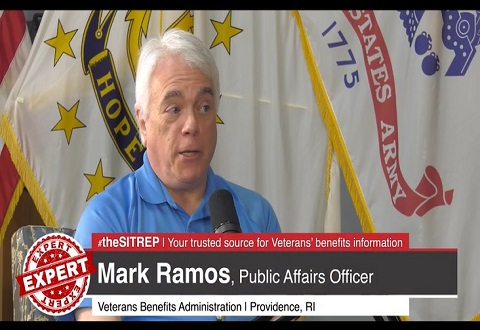 Mark Ramos, the public affairs officer for the Veterans Benefits Administration regional office in Providence, R.I., talks about the process for filing a VA disability claim during a recent segment of “SITREP.”

Segments on VA benefits are incredibly important during a time when many Veterans are physically and socially isolated, says Paul Corbett, a Marine Corps Veteran and VA New England marketing specialist, who along with McNamara co-produce and host a new online program called the “SITREP.”

SITREP is intended to be just as Veterans remember a “situation report” to be when they served in the military – a status report on current activity. In VA New England’s care, SITREP is a status report with topics ranging from how to start a claim for disability compensation with the Veterans Benefits Administration to what a Veteran needs to know if they receive health care at a community emergency room.  Corbett interviews subject matter experts who know the topic the best.

“This is information for Veterans to improve their knowledge about anything Veteran related and about our VA,” says Corbett, who created a studio set with portraits depicting military history as well as classic and easily recognizable props such as green toy Army Soldiers.  “We want to be upbeat, conversational and entertaining all with a purpose to drill down each month and break down the VA in easy to understand segments.”

The new program airs once a month on the official Veterans Health Administration YouTube channel playlist and on VA’s “Veterans News Network.”

Although the segments are produced out of VA New England’s headquarters in Bedford, Mass., the content produced can apply and appeal to any Veteran across the nation.  One segment is devoted to a particular state benefit. In the premier edition, for example, Corbett shared information about a state of Texas provision that provides free college tuition for eligible Veterans, spouses and dependent children.

All VA New England communications products are Veteran centric – focused specifically on what Veterans have said they are interested in and the information they need to better access VA benefits and services.

In support of that strategy, VA New England this year also launched “New England Veteran,” a new publication that can be shared digitally with profiles of Veterans in the community, to include VA staff who served in the Armed Forces before continuing their federal service in the Veterans Health Administration.

VA New England videos and print products are part of integrated communications effort that features information Veterans can use to live healthier lives, including “Healthy Kitchen” recipes, and fitness and wellness tips. 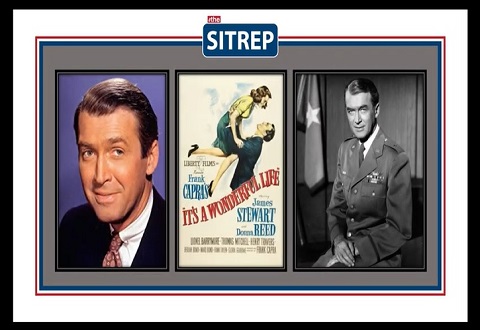 MAKING IT EASY FOR VETERANS TO FIND INFORMATION

Many of the articles in the print magazine are linked to the SITREP program and other “New England Veteran” videos on the VHA YouTube channel.  From there, Veterans can also see SITREP’s popular Veteran video podcasts as well as public service announcements and a History and Heritage series, such as a feature on the Battle of Midway that also appeared in the first SITREP episode.

“Just as our health care has pivoted toward virtual care these past several months, we’ve made a big push to reach out to our Veterans in New England with informative information that anyone can easily and quickly find online,” says Mike McNamara, chief of marketing for VA New England.

Regardless of the pandemic, McNamara said the “new terrain” for VA outreach efforts now and into the future will be embracing new marketing strategies with professionally produced videos and companion print articles.

“We have to adapt our efforts to better reach our Veterans,” said McNamara.  “We are very fortunate here in New England to get exceptional support from our leadership in launching this campaign.”

To view VA New England videos, visit VHA’s YouTube channel and then link under the Playlists tab to find VA New England’s full suite of videos, to include #theSITREP.