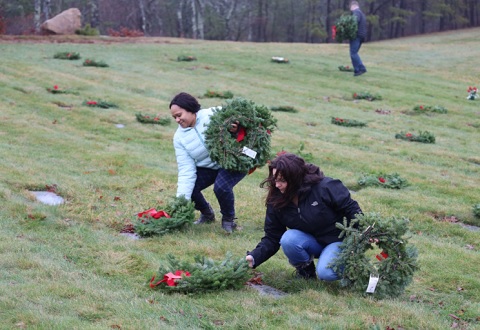 Kattie Davis Daily, nurse manager for the Ambulatory Surgery Center at VA Jamaica Plain, left, and Debbie White, a registered nurse at VA Jamaica Plain, place wreaths at the grave sites of Veterans at Massachusetts National Cemetery in Bourne, Mass., during the 2019 Wreaths Across America on Saturday, Dec. 14.

BOURNE, Mass. -- Debbie White, a registered nurse at the Jamaica Plain medical campus of the Veterans Health Administration, kneeled down before the gravesites of her father, mother and brother at the Massachusetts National Cemetery on Saturday, Dec. 14.

She said their names: her father, Edgar Machado, a World War II Army Veteran; mother Elizabeth; and brother, Edward. She then stood up, stepped back, paused, reflected for a moment, and, with some tears, thanked and remembered her loved ones.

She and her sister, Barbara, and other family members had just finished laying fresh balsam evergreen wreaths at the grave sites as part of a nationwide Wreaths Across America commemoration.

A few minutes before, they were witness to a heartfelt ceremony in which more than 1,000 other volunteers from throughout New England paused to honor and remember the more than 50,000 Veterans and family members who are forever interred at the cemetery located in Bourne on Cape Cod.

Hosted by local organizers with Wreaths Across America, the ceremony has become an annual holiday tradition at the U.S. Department of Veterans Affairs national cemetery on Cape Cod and at more than 1,700 cemeteries across the nation, including more than a dozen in New England.

The national anthem was performed. Members of the Knights of Columbus and the Old Guard of New England rendered honors and taps was played. The key note speaker was Mary Lou McCarthy, the sister of U.S. Army Sgt. Major Kevin Walsh, a Veteran of operations in Kosovo and Afghanistan who died in 2014.

White said she was grateful to see such respect delivered and to be joined by so many people to include fellow VA employees from the VA Boston Healthcare System.

“It really makes my heart happy,” said White as she and VA colleagues walked out from her family’s gravesites at Section 5 to help place wreaths on the graves of other service members and loved ones at the cemetery.

“It’s an honor to come here to do this,” she said. “This is my gift to them – all the Veterans -- by giving my time to acknowledge them and to say thank you to them.”

Her sentiments were echoed by other VA staff members.

“It’s an opportunity to come and give back to the Veterans who just risked everything for us,” said Kattie Davis Daily, nurse manager for the Ambulatory Surgery Center at VA Jamaica Plain.

Daily and her fellow VA employees said their participation with Wreaths Across America was an extension of their mission in caring for Veterans.

“They gave up their families, their time and they served their country,” said Daily of the Veterans laid to rest at Bourne. “For me to be here and to lay wreaths for our Veterans is very important.” 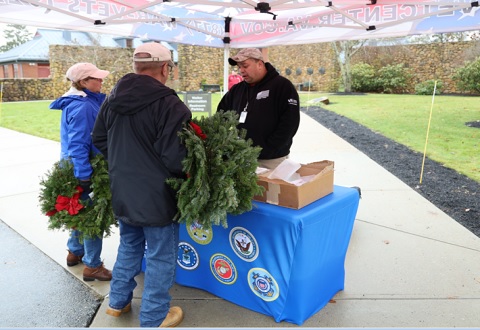 Adam Doerfler, veterans outreach program specialist with the Cape Cod Vet Center in Hyannis, Mass., speaks with volunteers before they place wreaths at the Massachusetts National Cemetery following a ceremony hosted by Wreaths Across America.

With gusts of wind at their backs, they grabbed wreaths from the back of a pickup truck under foggy skies and occasional rain showers to remember and honor the veterans, saying the name of each Veteran aloud when placing a wreath at each grave site.

Earlier in the morning, other groups of volunteers, including VA staff, had arrived during a heavy downpour to help offload hundreds of boxes of wreaths from tractor trailers at various distribution points throughout the nearly 750-acre cemetery.

Winston E. Nicholls, supervisory medical support assistant with Surgical Services at the West Roxbury campus for VA Boston, said he had looked out his window from his home in Brockton and wasn’t sure with the bad weather how many people would volunteer to lay wreaths.

The Navy veteran said he was pleasantly and warmly gratified to see so many people participating for Wreaths Across America. Given the sacrifices of the many Veterans who rest in eternity at the cemetery, Nichols said it was necessary for him to be part of the day’s duty.

“I believe it’s the least we can do to be here and honor them,” he said.

Dennis Mills, the Cape Cod location leader for Wreaths Across America and an Air Force master sergeant at Otis Air National Guard Base, said more than 16,700 wreath were placed at gravesites at the national cemetery. Mills acknowledged the outstanding support from the cemetery’s staff.

Fourteen employees at the national cemetery assisted with the day’s activities, which included parking and traffic control and helping family members and loved ones find the burial sites of Veterans. The day’s program directly supports the NCA’s mission to ensure that “no veteran ever dies,” said Richard Wallace, director of the national cemetery and a retired Air Force chief master sergeant.

“The wreaths symbolize everlasting life,” said Wallace. “It’s our sacred mission to ensure our Veterans will always be remembered.”

NCA staff also volunteered to place wreaths. One of them was Stephen Pezzella, a retired Army infantry officer, who has been a cemetery representative at the cemetery for the past nine years.

Pezzella grabbed his Army gortex jacket for protection against the sheets of rain while offloading wreaths earlier that morning. He afterward took the time to welcome family members back to the cemetery, many of whom he assisted during committal services and burials.

“The thing that binds us all together is that we at some time had the privilege to serve our country,” said Pezzella. “And here today we’re honoring not only of course the veterans by placing the wreaths at their grave site, but I believe we are also honoring all Veterans and their families, past and present all over the world.”

While outside the cemetery’s administration building, he greeted Peter Screnci, whose father Peter, a World War II Navy Veteran, and mother, Mary, are buried at the cemetery. Screnci thanked the cemetery staff for their support and said Wreaths Across America is an extremely moving and meaningful day for military families.

Wreaths Across America is one of several events throughout the year held at the cemetery, said Theresa Souza who has worked for VA for 32 years.

"IT"S IMPORTANT TO US THAT EVERYONE IS REMEMBERED"

Each quarter, Souza says one of the most special activities is the cemetery’s “No Veteran Forgotten” program, where veterans who are buried at the cemetery but, who are without family, have their names read. A service is held and military honors are given.

Earlier in the day, as she has done for the past several years, Souza places a wreath at a gravesite of a Veteran and the Veteran’s spouse at the request of their daughter who lives outside New England and can’t be in Bourne for the ceremony.

So Teresa takes a picture of the wreath at the gravesite and then sends the picture to the daughter.

“It’s important to us that everyone is remembered,” said Souza, who said it was an honor to come to work each day, knowing she is serving Veterans and their loved ones. Her daughter, Brianna, leaves for basic training to serve in the Air Force in January.

Wreaths Across America was started in 1992 at Arlington National Cemetery by Morrill Worcester, owner of Worcester Wreath Company of Harrington, Maine. Each year since, the company launches trucks from the Worcester farm out to Arlington and to Bourne and other ceremonies across the nation.

In addition to the Bourne wreath ceremony and others in New England on Saturday, VA employees, including several from New England vet centers, traveled to the Washington D.C. area for the weekend to participate in Wreaths Across America events.

Nickerson is the sister of Army Maj. Michael Donahue, a paratrooper who was killed in action in Afghanistan in 2014.

There are more than 28,000 Veterans who live on the cape, and the holidays are often a tough time for many Veterans and family members, said Adam Doerfler, veterans outreach program specialist with the Cape Cod Vet Center in Hyannis.

The Vet Center is blessed, he said, to have a community on the cape that gives back. He said the Vet Center recently received gift cards and donated turkeys to present to Veterans in need and service members from nearby Otis Air National Guard Base have been particularly supportive.

At the Bourne ceremony, Doerfler set up an outreach tent to remind Veterans and their family members that VA provides counseling and programs throughout the year and helps those who may be struggling during the holiday season.

“We’re here for you,” said Doerfler, a Marine Corps Veteran of Desert Storm.