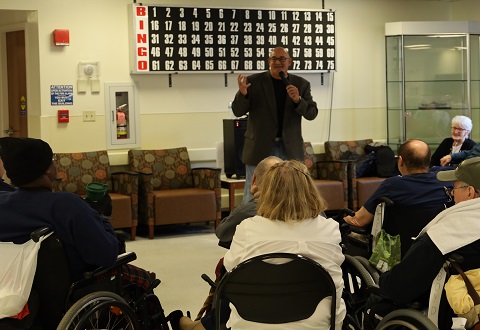 BEDFORD, Mass. -- Actor and entertainer Wayne Soares says his best audiences when he performs are military Veterans and members of the U.S. Armed Forces.

Soares, a former ESPN broadcaster and Hollywood publicist, has embarked on a self-described “New England Veterans Tour,” bringing a homespun comedic and musical act to Veterans and their family members.

His first visit to a VA medical center was at the Edith Nourse Rogers Memorial Veterans Hospital in Bedford this past week where he produced lots of laughs and smiles inside a packed community day room of Veteran patients, residents and VA staff members.

Next up will be VA Boston on Veterans Day.  He travels next month overseas, for what will be his fifth time, to entertain deployed service members.

In the past year, he’s also performed at nursing homes and assisted living centers throughout New England. He also started a golf tournament in September with Boston sports greats like Rico Petrocelli and Rick Middleton to raise funds for homeless and disabled Veterans.

“I want to thank each and every one of you for your service to our great country,” Soares tells the Veterans.  “You’re absolutely the best audience in the world.”

In a one-man, vaudeville style performance, Soares reminisced with the Veteran audience about his memories and meet-ups with various sports figures and celebrities over the years, from boxer Muhammad Ali to singer Frank Sinatra.

It was a splendid afternoon of walking down memory lane that was thoroughly enjoyed by the VA Bedford Veterans.

“I absolutely loved it; I had a really good time,” said Marion Sheridan, a 94-year-old Navy Veteran, who enlisted in 1944 during World War II and would serve again during the Korean War.  “I loved the music, and Frank Sinatra was my favorite so it was like he was speaking to me.”

In his repertoire, Soares also included songs from legends such as Bing Crosby, Louie Armstrong and Gene Kelly.  He also does fun impressions of American icons like Jimmy Durante, Marlon Brando and Jimmy Stewart.  At the end, he plays each of the military service branch songs, and he knows all the lyrics.

When Soares did a spot-on monologue back and forth of Howard Cosell interviewing Ali before the “Thrilla in Manilla,” the famous fight between Joe Frazier and Ali, Leon Key, an Army combat Veteran of the Vietnam War, perks up and laughs. 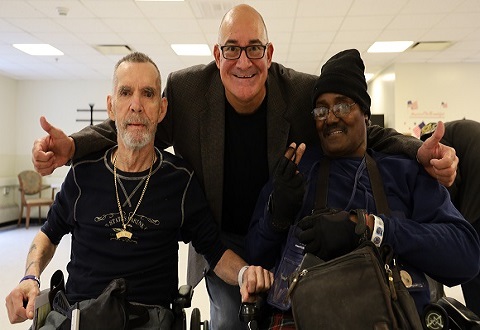 “I loved it,” said Key, who grew up in Roxbury and said he met the boxer in downtown Boston and got his autograph. It was many years ago but he remembers the day like it was yesterday.  “I loved Ali so to hear that today -- that was a great memory.”

Key said he appreciated Soares taking the time to visit Veterans at the medical center.

“You know something?” he asks. “We need more of this – that’s really nice for him to be here today. To have someone give something back to us who did what we did for our country; that’s how it should be.  More people should do it and it was nice to see him here today.”

From his day spent in Bedford, Soares said he was thoroughly impressed with the level of care Veterans receive and how attentive VA staff were with all the Veterans he met. He encourages his fellow citizens to volunteer at a VA medical center and to take the time to visit Veterans.

“I had a ball today,” said Soares, who lives in the Berkshires. “You can never put a price tag on how much a visit like this means for our Veterans -- to let them know that we know we’re not forgetting them and that we’ll continue to remember them.”

John Paradis is the senior editor and writer for the VA New England Healthcare System.